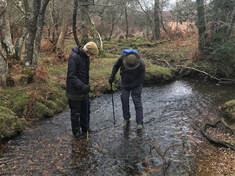 Chris and Mike test the depth of Bratley Water!
The Met Office forecast was for heavy rain, with a probability of 95% or greater, so it was a determined group of walkers (although, some might use other adjectives!) who met at 10am at the Canadian War Memorial, for a walk across the heath. Unfortunately, four members arrived just after we had set off, but with no mobile phone signal in this part of the forest, we were unable to receive messages. However, they were able to find their own walks to follow, and we were pleased that all were able to meet up for lunch at the New Forest Inn later.
Our group of ten faced the challenge of crossing Bratley Water with equanimity, and all made it across with relatively dry feet. We then followed the grass track up through the deciduous woodland to reach Sandy Ridge. Here, the rain was being driven across by strong gusts of wind, so it was with some relief that we eventually entered the shelter of North Oakley Inclosure to pause for a photograph. The route then followed the track heading northwards, having the luxury of a bridge to re-cross Bratley Water, and passing the back of the Bolderwood Deer Sanctuary to return to the start. With such conditions, it was unsurprising that no deer were visible, although they had been spotted on a previous visit.
Report by: Mike Townsend, February 2022